So, here’s a quick rundown of episodes five a six: Short answer: Uther fucked a troll.

Longer answer: An evil troll decides she’s going to straight up seduce the king and steal the throne of Camelot. She disguises herself as a beautiful woman from Uther’s past and works the “I’m a damsel in distress, can you save me, big, strong king?” thing until he falls in love with her– at which point Merlin and Gaius already know she’s a troll. Uther and the troll lady marry, and she slaps a magic amulet on him that lets her control him through the power of lurve. Then she makes him raise taxes and disinherit Arthur. The amulet also makes Uther stoned as fuck, so when Merlin gives the troll a magic potion that reveals her trollness at her coronation, Uther just DNGAF and rolls with it– and passionately consummates their royal marriage with the disgusting troll. Merlin goes to the dragon for help, and once he manages to finish laughing (for real, the dragon loves it) he tells Merlin that the only way to break the amulet’s spell is for Uther to cry tears of regret. Which, you know, this is the guy who ordered a child to be put to death in season one, so good luck with that, Merlin. Gaius gives Arthur a Juliet potion to make him seem dead, and when Uther realizes that his only son has died and he’s been treating him like shit for weeks, he cries and realizes that his wife is a troll. And that everybody in the kingdom knows what he’s been doing with that troll. And even though he probably issues a royal proclamation forbidding anyone to talk about it, as peasants pass each other in the streets, they can meet each other’s gazes knowingly.

If I had written this episode, I would have changed: Morgana and Gwen would have been in it. Like, at all. Merlin spends all his time trying to convince Arthur that the queen is a troll, but he never goes to Morgana or Gwen for help. They’re non-entities standing in the background for the entire show.

The thing I loved most about this episode: After all the pain and suffering he’s caused, after the shitty way he treats his son and his ward, after the numerous executions, his hypocrisy about magic, literally everything Uther has done and ever will do… he fucked a troll. And everybody knows.

The other thing I really loved was Lady Katrina, the troll. The actress who plays her is amazing, and clearly enjoying the role. Even if you don’t watch Merlin, you should watch these two episodes just to enjoy her facial expressions, and her acting in the troll suit.

The thing I hated most about this episode: What the fuck was up with all the fruit? There seems to be more with every episode! AND WE HAVE NEVER SEEN AN ORCHARD IN CAMELOT THEY’RE ALWAYS TALKING ABOUT GRAIN! 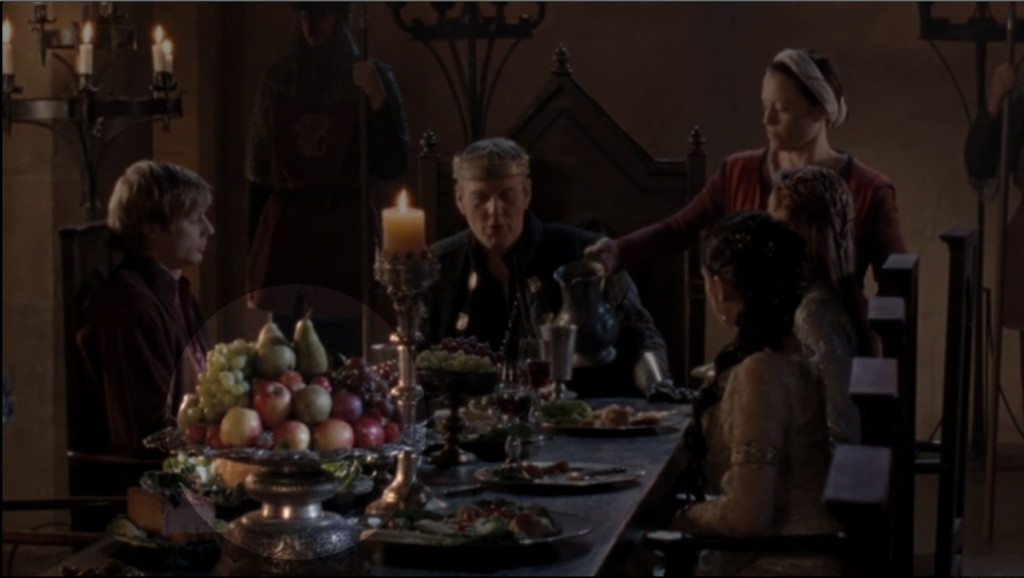 I guess on the dinner table, that’s okay. I mean, there’s no way they’re going to eat all of it, but maybe it’s there for more than one meal. 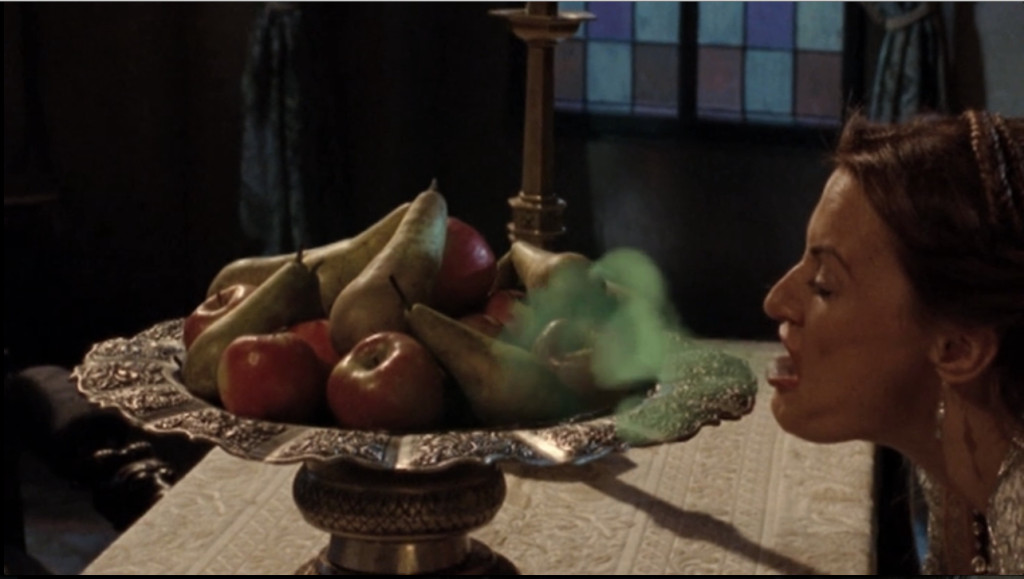 Uther sent “Lady Katrina” a bowl of fruit as a gift… okay, people send fruit baskets, I guess this is normal (she’s rotting the fruit with her breath to make it more palatable). 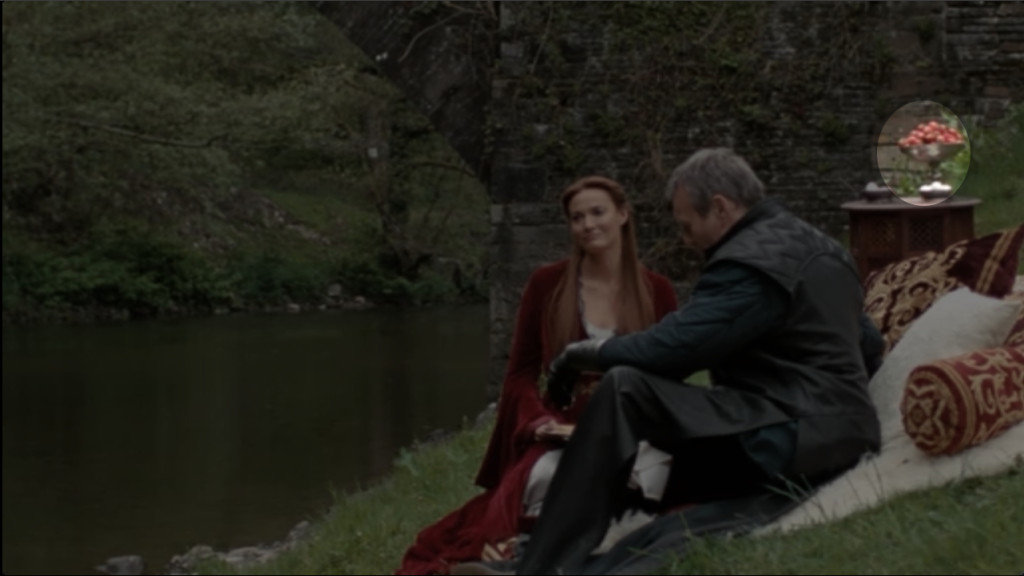 Wait, wait. Did Uther bring furniture on this date? Never mind. The important thing is that he brought all those apples. How on earth were they going to eat that many apples? Was that the date? Is that why Ygraine died?!

And then there’s this:

Is that random hallway fruit? Are you kidding me with this? Just fruit. Waiting in the hallway for a troll to angrily flip it. WHAT IS FRUIT DOING THERE?!

Something I never noticed before: How little Uther smiles in every other episode. I only noticed it in this episode because he smiled so much. I get that he’s supposed to be stern and evil and shit, but he could smile at his son more. And not just when he’s fighting in a tournament. Like, just smile at your fucking son. Ruffle his hair. Be a father.

You suck so much, Uther. 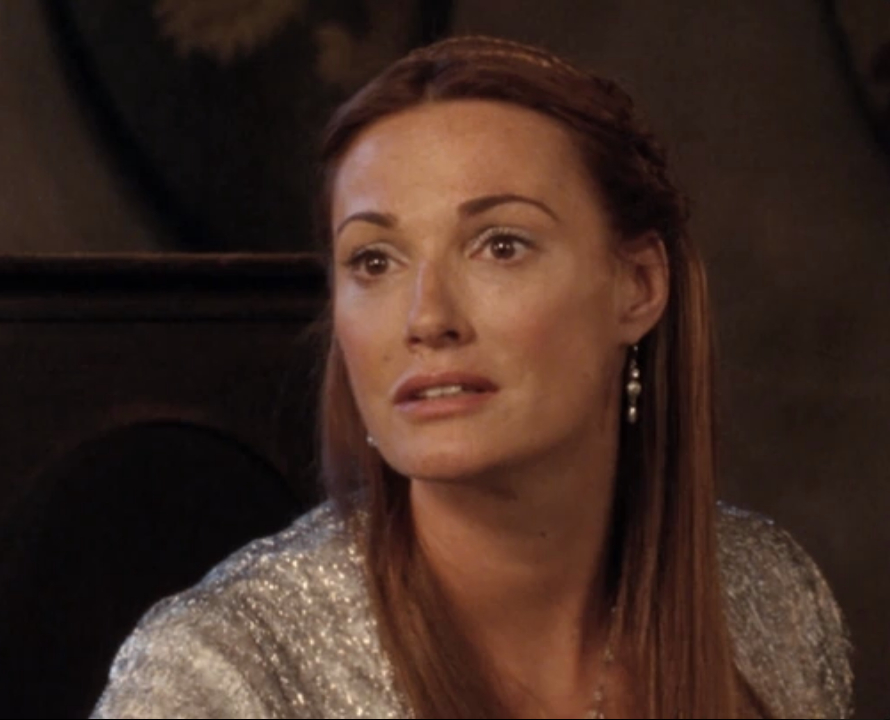 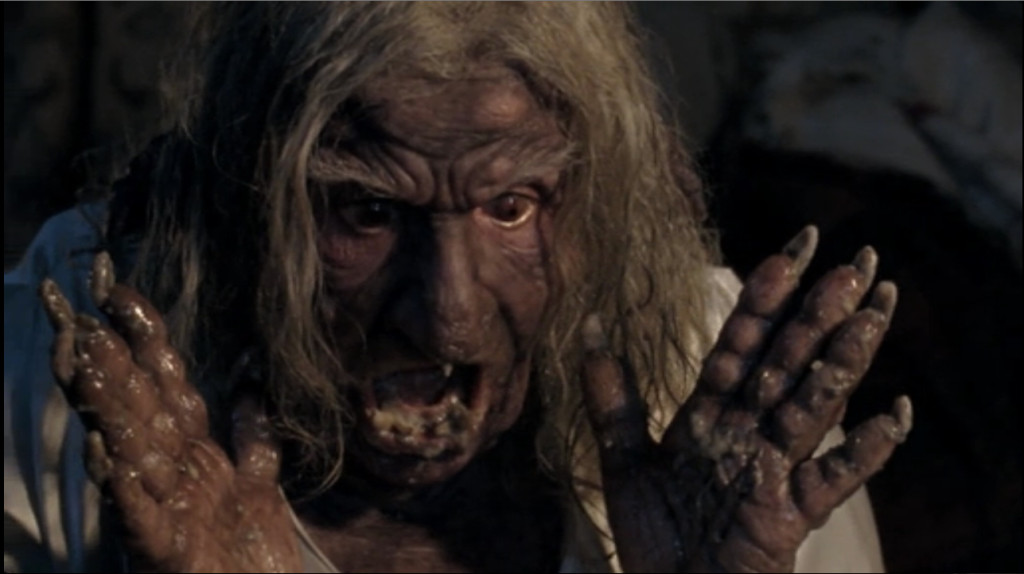 This is the same woman. If you don’t think this is the best costume, possibly of the entire series, you’re WRONG.

Here is proof of some random headcanon I created: My new headcanon is that Uther is obsessed with fruit, and this entire episode is specifically about that. I will develop some elaborate backstory to explain the fruit. It consumes me. 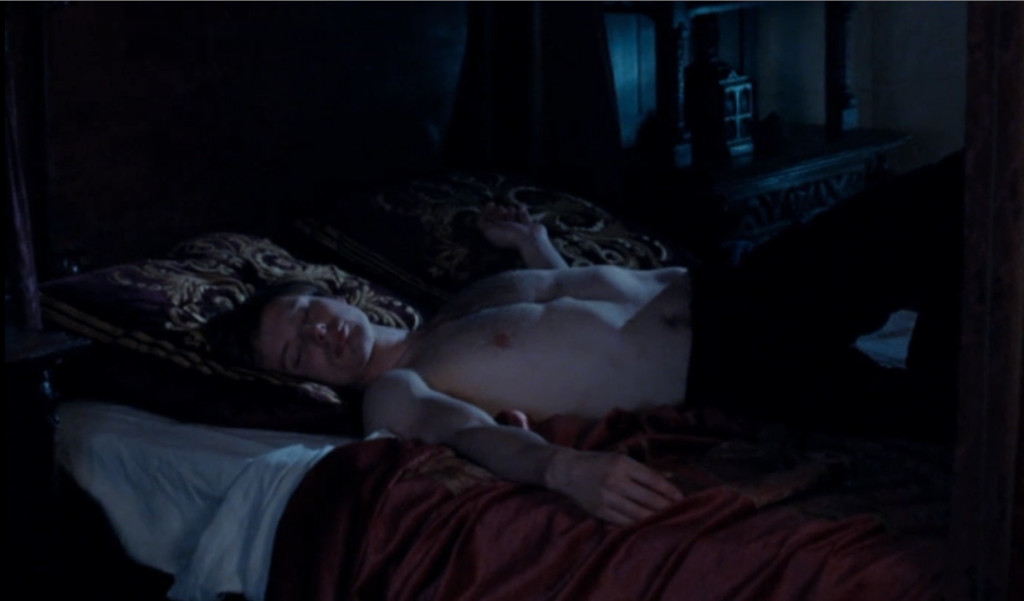 Obviously I’m talking about those pillows.

What did you think I was talking about?

What Merthur moment did Jess have the naughtiest thoughts about? When Merlin popped out from under Arthur’s bed and Arthur was like, “Have you been under there the whole time.” Why so paranoid, Arthur? What were you doing in your room all alone that you don’t want Merlin to know about? *eyebrows*

That’s it for this week. Join us on Monday as we watch S02E07, “The Witchfinder” at 8pm EST on the hashtag #MerlinClub.