50 Shades of This Is Not Cool, Guys

By now, every single author with a summer release knows that their book is doomed to fall into the black hole that is Grey, E.L. James’s regurgitation of her blockbuster novel 50 Shades of Grey. A title like Grey is like an event horizon. It will suck everything into its gravity with no chance of escape. All other books will come to a standstill, approaching, but never reaching, the sales success they would have had if Grey hadn’t come crashing into the market. And it doesn’t just happen to small books. Big, splashy titles will be affected, and you’ll see regular NYT #1-ers failing to reach the spot.

In other words, fiction sales this summer are “fifty shades of fucked up.”

So, if Grey is expected to sell out its unheard of print run (1.25 million copies in its first printing), why does it need to be prominently advertised on other titles? Oh, for example… 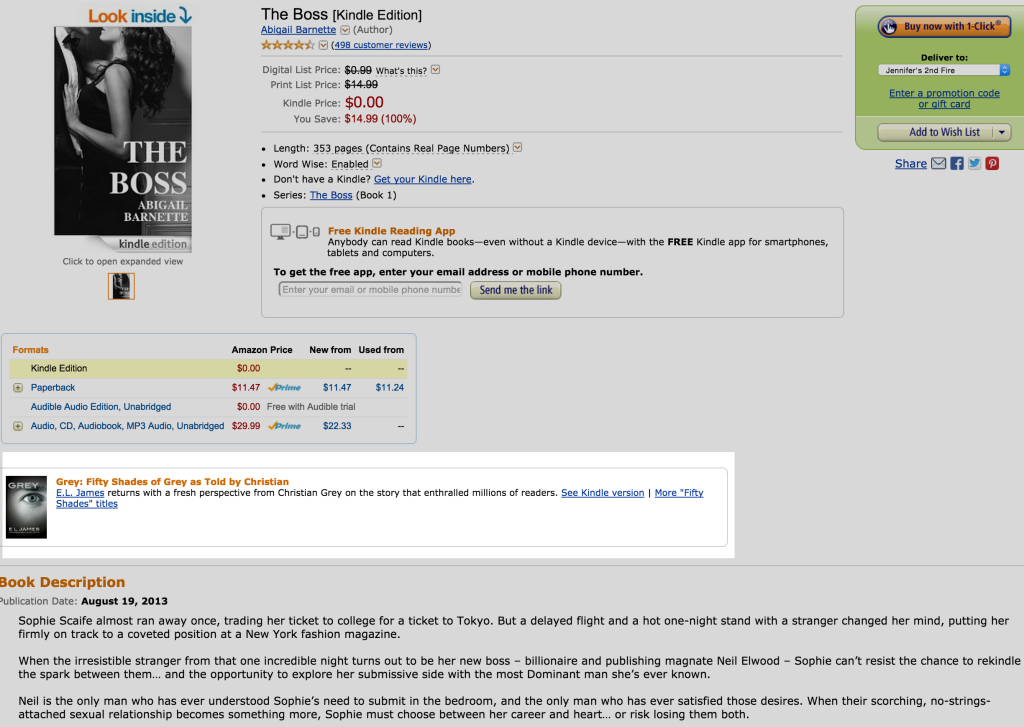 If you can’t see the graphic, it’s a screen shot of the Amazon page for my book, The Boss (which is free and, from what I understand, pretty fantastic, so check it out if you want). Before the reader browsing through the page can even reach the book’s description, there’s an add imploring the consumer to visit the Kindle store page for Grey: Fifty Shades of Grey as Told by Christian, and providing links to “More ‘Fifty Shades’ titles.”

In other words, “Before you have a chance to read about this book you were interested in a minute ago, might we redirect you to this other one, instead?”

So, what gives, Amazon? Grey is already #1 in both the Kindle store and among regular books. It is a part of the bestselling fiction series of all time. It has a first print run of 1.25 million copies. Does it really, truly need sales so bad as to potentially drive them away from authors who sell less? One author who found her product page bearing the advertisement reported that she “barely broke” a thousand dollars in profit last year, a far cry from the $95 million James made in 2013. The ad showed up on the product page for one author who reports selling approximately 120 ebooks per year. 120. What compels the logic that E.L. James desperately needs those 120 readers to see her title and potentially drive readers from that 120 copy selling author to Grey? And that author has no hope of seeing her book placed prominently on the Grey product page.

According to Publisher’s Weekly, Vintage Press, James’s publisher, doesn’t feel the book needs any advertisement at all:

When asked why Vintage announced the book just two weeks before its on sale date, Bogaards said, it’s what E.L. James, nee Erika Mitchell, wanted. “Erika wanted this to be a surprise for her readers, and the only amplification that was necessary on our end was to point press to her tweet [about the publication], which we did.”

So, if a simple tweet will suffice to drive the sales of this book (and it absolutely will and has), I have to ask…why would anyone go the extra mile to potentially squash the sales of other authors? Maybe I’m just not retail savvy enough to understand it. Either Amazon is behind the campaign (possible) or Vintage Press has sprung for the placement (more possible). Either way, the retail behemoth has to understand that Grey is guaranteed money in their pockets with or without this advertisment, so it doesn’t make sense to undercut sales of other titles.

I guess the lesson we can all learn from this is that there is no coattail so small that E.L. James’s masterwork cannot ride it.